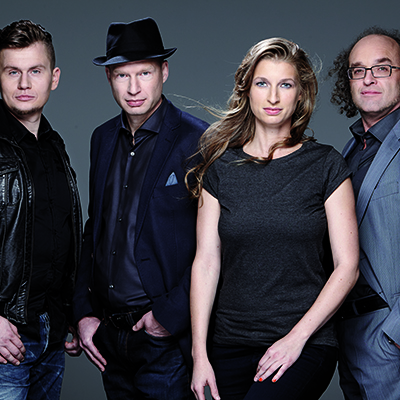 “NICOLE JO” was formed in 1998 in Saarland, Germany. The quartet drew its name from the group’s founder and saxophonist, Nicole Johänntgen. Together with her brother, keyboardist Stefan Johänntgen, the Saarland-based musician grew up in an environment steeped in music. Both Nicole and Stefan played in their father’s group, the “Joe Fuchs Band”, where they gained a deeper feeling for their music and audience.  It was during this period that they met drummer Elmar Federkeil at a concert in which the three were appearing.  As fate would have it, that legendary evening at a bakery in the town of Vökllingen was the spark that launched their new band, “Nicole Jo. Needs 2b funky,” from which “NICOLE JO“ emerged in 2011.

While Nicole devoted herself entirely to music, studying jazz-pop in Mannheim, Stefan turned to electrical engineering and went to work at the Institute for Mineralogy in Heidelberg.  He was able to manage these two activities in way that allowed him to be successful in both his music and his work at the Institute for Mineralogy.  The strong bond between brother and sister can be heard in the music and is evident as well in their nearly daily collaborations.  While Nicole focuses on composing, organizing concert tours and working on media relations, Stefan concentrated on developing the distinctive sound that is characteristic of the band.

Nicole Johänntgen is active around the world as guest soloist, music instructor and ambassador, and in the process lets her saxophone whisper and explodes.  For all its wild flights of improvisation, Nicole highly expressive sax playing is firmly rooted in the blues and soul-jazz traditions.

“NICOLE JO” is releasing their new CD “Colours“, in November, 2014, which is a synthesis of multicolored sounds drawn from the worlds of Jazz, Pop, Soul, Blues and film music. It’s packed full of spicy emotions, catchy dance rhythms and soulful soundscapes.

For this new CD “Colours”, Stephan not only worked the keyboards, but served as the producer and sound engineer.  Elmar Federkeil expanded his drum set, combining it with an array of other percussion instruments. The Saarland native provides the punchy beats that supply the band with drive.  In addition to his new stage set-up, the seldom heard “Blue Point Steel Harp“ has also been added to the instrumental lineup.  It looks a lot like the so-called “Hang“, a musical instrument made in Switzerland, that produces an ethereal sound that blends beautifully with the sounds issuing from the keyboard.  Bassist Philipp Rehm furnishes the deeper tones that lend greater clarity to the band’s overall sound.  His musical ideas, which draw in part on African melodies, served as the basis for many of the numbers on the new CD.